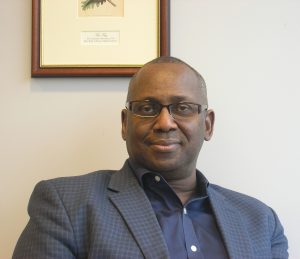 You can’t just do textual work in the class and then leave it behind as if it’s an exercise. The metaphor I often use is that the books we read shouldn’t exist on bookshelves, they should exist on the shelves of our minds, meaning that the texts that we read should challenge us intellectually, and that intellectual challenge should materialize into some sort of action, whether it is emotional action or intellectual activism or some sort of material change in the world that we can create. My goal is to get students to those kinds of points of recognition, get to those moments of demanding of themselves, agency and intellectual activism, and however that translates going forward, that’s good. – Professor Smith

Today we feature Dr. Ian Smith, Richard and Joan Sell Professor of the Humanities. We focus on one of Professor Smith’s courses where students explore race through the works of William Shakespeare using literary analysis. Dr. Smith and two of his prior students recently described their experiences in the course during the Inclusive Teaching & Excellence Series session, “Back When Shakespeare Was Black: A Panel Discussion on Teaching Race,” a pre-event for the upcoming Keefe Colloquium in the Public Humanities described below. In an interview following the panel discussion, Professor Smith elaborated upon what he most enjoys about teaching Lafayette students, and aspects of his teaching philosophy:

[I like] the challenge of teaching at a school where we have students from diverse backgrounds, many of whom have not necessarily thought about what it means to talk about race in the classroom, to read texts about race, and, more importantly, to see themselves as raced. It’s so easy to think in our society of race as pertaining to somebody else. The word race, for us, often triggers ideas of some other person who is implicated in its story, and by implicated I don’t mean what happens with White guilt–that is not what I practice. For me, it’s about how we are all complicit in the narrative, but here is what I mean by complicit–that there is a factual narrative that we have to recognize; that we can’t just deny slavery and its consequences in US history. Those are the things that we have to acknowledge, through various texts and documents. But then we have to recognize that that history involves us all…so the question is not about guilt from the past, but for me it is about the choices we  make now, today about developing the racial agency for constructing our present and future.

In teaching race in the classroom, Professor Smith recognizes the critical importance of allowing time for students to feel comfortable entering into such conversations, and the rewarding teaching moments that can follow:

It’s slow, gradual work. The work that you can do at week 8, you can’t do in week 1…that week 8 moment is when, for example, the first time…where I ask the question, ‘How does this affect you?’ Up until then people can talk about whiteness and Shakespeare, but then at a certain point when you think they are ready, the conversation just opens up; I say here is an opportunity. So, it really sort of evolves. I don’t choose week 8; in my experience somewhere around there is when students get comfortable enough to (a) do the reflection and (b) talk about it. Those are the moments and, for me, the great pleasure…So often faculty say it is difficult to do race work in the classroom. I must say in my experience, students have been willing to do that work. I think part of their willingness is related to patience, planning, and timing. You have to wait until they’re ready.  You can’t force it…and part of the reason I do this close textual work is because the evidence is there, and they can’t say, ‘Oh, he’s just making this up.’ And that creates trust you see, and you want to create trust in the classroom where they trust me, they trust one another, I trust them, so that when it happens we can have those [discussions] and they are willing to speak up.

During his classroom discussions, Professor Smith empowers his students to think deeply about the readings and apply them to their lives:

I really do believe that teaching is a form of intellectual activism…and I think that one of the goals is to encourage students to understand and embrace that in a very firm way to provide a certain kind agency for them. What I list as an epigraph for the colloquium, where I talk about citizenship, is part of our job, [to ask], ‘How does that work make a demand on me?’  That’s always a question for me, and, ‘What am I going to do with that demand that is placed on me’ and that is why I do the kind of teaching that I do, along with the texts I use, that allows those kinds of questions. Now other disciplines bring other strategies and approaches and texts, but hopefully they will achieve some similar kinds of goals as well.

Dr. Smith believes that what students learn in his classroom should change them in some way, and that college in general should be a transformative experience:

You shouldn’t depart college the way you came in. Something should happen in the course of your four years which doesn’t mean you have to abandon who you were when you came in, but it could mean being able to articulate who you are, what you thought, better and then sometimes it may require some knowledge, some change, and being able to embrace that with confidence and make it yours. You shouldn’t be the same person four years later. If that’s the case, you’ve missed out on an opportunity, I believe.

Lafayette student Taylor Kowgios (‘19) describes the impact of Dr. Smith’s course on her educational experience at the college:

I can honestly say that Professor Smith’s class has been one of the most influential classes I’ve taken in my four years at Lafayette. He really emphasized to us that following the status quo may not allow for the truest readings of, in our case, Shakespeare. And this ideology relates to our lives too. There were a few moments throughout the semester where Professor Smith would put down his papers and pull off his glasses and we would all find ourselves on the edges of our seats, excited by what he was going to say next. He would start talking about life and society and self and how we, today, relate to race, gender and sexuality. And he would articulate his comments and ideas so efficiently that he would entrance the class. Every pair of eyes would be glued on him, or frantically scribbling down as much of what he was saying as we physically could. I would always get goosebumps. It’s the classes we take that influence you deep down that really have the lasting impact. And to be able to be exposed to Shakespeare while being moved in this way was really an amazing opportunity.

To continue the conversation on teaching race in the classroom, the Lafayette community is cordially invited to attend the Keefe Colloquium in the Public Humanities, “Teaching Shakespeare and Race” at the end of March. Please see more information about the event below.

Keefe Colloquium in the Public Humanities: “Teaching Shakespeare and Race”

In an increasingly changing society, in which new social and political realities posit intense cultural transformation, education that embraces inclusion and diversity is a requirement for a useful, serious, and innovative academic enterprise.