We all have to make important decisions sometimes without knowing everything we would like to know. But we have to make those decisions and then we have to live with the consequences. It’s part of the human condition. This is one of the profound topics that Greek tragedy fully lays out. That’s just one example of what students can learn and grapple with in Classics that is, I am convinced, helpful, especially for young adults as they get ready to embark on their own journey through life. I could give many similar examples from mythology about other “life lessons” that are baked into these stories.

If you asked Associate Professor Markus Dubischar at the end of high school in Germany which career path he wanted to pursue, a Classicist would not have been his response—at that time he was drawn to the field of biochemistry. Years and many experiences later, after identifying teaching as his passion, and Classics as an area in which there was a need for teachers at German schools, he now enjoys teaching and scholarship in his discipline at Lafayette. “It’s a dream job,” he says, “and I see it as my obligation to give the students in my classes an equally rewarding experience, challenging but inspiring and worth every minute they spend engaging with the ancient languages Latin or Greek or with the many fascinating facets of Greco-Roman civilization.”

Since arriving at the college in 2008, Dr. Dubischar has devoted much energy to developing courses in Classical Civilization (CLSS), and to continue with great momentum the language classes in Latin and ancient Greek. There are currently ten CLSS courses being offered, in addition to Latin and Greek, a study abroad Italy interim course, and in Fall 2019 there will be a brand-new First Year Seminar about the Trojan War in modern films. With the help of other colleagues on campus, both in Classics and in neighboring disciplines such as Art, History, Philosophy, and Religious Studies, there is now a rich portfolio of 20 courses that count toward Classical Civilization. The high enrollment numbers show that CLSS and related courses are popular among students, and Dr. Dubischar is “happy to have a vibrant Classics section at Lafayette, with a constant stream of enthusiastic minors and self-designed majors every year.”

In his courses, Dr. Dubischar challenges his students to learn about ancient realities but then relate them to their lives and to the modern world. He expresses the value Lafayette students get from engaging with Classical antiquity:

[I] do research and teach about the ancient Greek and the ancient Roman world. I think of them as two immensely interesting places to visit. We can’t exactly physically travel back to antiquity, [but] through reading and discussing ancient literature and digesting what archeologists have uncovered in the last 150 years, we can visit those places intellectually. I think these are really important and rewarding “travels” for our students because there are so many things that are not only worth knowing about in their own right but that also help students think critically, see their own lives in different perspectives, and find useful reference points that can give them orientation as they are about to explore the world and life on their own once they graduate from college. This all may sound pretty weighty, but Classics does have that potential while it’s also a lot of fun. When stories, artworks, and moral or political ideas have been around for 2,000 years and longer, you can bet that they are pretty spectacular. That’s why I am not worried in the least about the appeal or the importance of Classics today.

As one example, students can apply what they learn about the ancient world to the decision-making of everyday life:

Greek tragedy often focuses on questions around human decision-making and its consequences. What leads to success or to failure? Human planning? Human acting? Fate? The gods? Luck, or bad luck? Is the outcome deserved? Was it inevitable? Did the decision-maker mess up? Is life fair? Are the gods fair? Do the gods even care, or know what humans think fairness is? Does fate govern things? These are all big and, if you let them sink in, vexing questions that Greek tragedy throws at you, without giving neat and cleans answers – because we humans don’t always get neat and clean answers. Our students, on the threshold of adulthood, are only beginning to understand, and to feel, the gravity of those questions. They are selecting their majors, which may put them on a certain career path; in some cases they may, while in college, find the person whom they will marry. These are all important decisions, and you want to get them right, or at least, as right as humanly possible. So there is much that students can learn from the tragedies of Sophocles or Euripides. Their plays capture that we all have to make important decisions sometimes without knowing everything we would like to know. But we have to make those decisions and then we have to live with the consequences. It’s part of the human condition. This is one of the profound topics that Greek tragedy fully lays out. That’s just one example of what students can learn and grapple with in Classics that is, I am convinced, helpful, especially for young adults as they get ready to embark on their own journey through life. I could give many similar examples from mythology about other “life lessons” that are baked into these stories. Looking at it this way, the stories of Oedipus and others don’t seem old and removed at all. Life is too short to be teaching and learning irrelevant things. But the ancient world is extremely relevant.

In general, teaching Classics at a liberal arts college is an ideal setting for Professor Dubischar:

What I love about the American liberal arts college model, which Germany does not have by the way, is [that]…students can take Classics courses they find interesting, they can minor or even major in Classics, usually adding it as a second major, and it doesn’t hurt their career. A few weeks ago, one of my students was selected for a competitive law internship in Washington DC. What set her apart from the rest was that her second major was Classics and that she had spent the summer before in Rome working for the Paideia Institute, a Classics non-profit organization to which we have close ties. Another one of my former students is now on his way to becoming a Classics professor himself. So that’s also possible. Therefore, I wholeheartedly believe in the liberal arts model in American undergrad education and in the way Lafayette embraces it.

Professor Dubischar also designed a study abroad interim course in Europe to bring his students closer to the ancient world. During this course, students first travel by plane to Munich, Germany, where they study the traces the Roman Empire left behind even there. Then they enjoy a breathtaking train ride over the Alps, which takes them into Italy, with extended stays following in Verona, Rome, and Naples. While they travel, the class reads and discusses the works of earlier travel writers such as Johann Wolfgang von Goethe, Charles Dickens, Mark Twain, and Henry James. These brilliant writers’ vivid accounts provide an additional layer of history and experience to the students’ own “Italian Journey.” Photos taken during last January’s interim course are shown below. 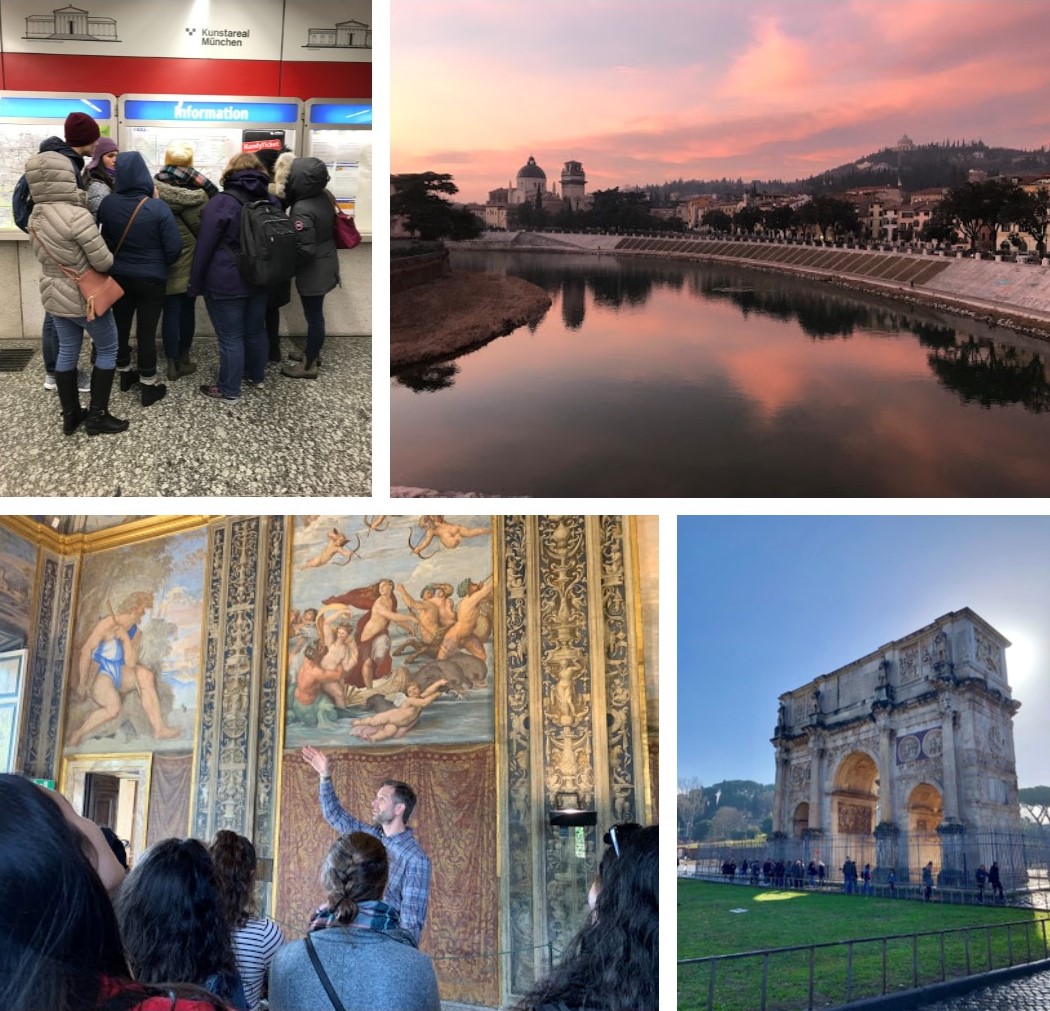 In sum, Professor Dubischar’s commitment to teaching excellence at Lafayette is demonstrated through the varied and significant learning experiences he designs for his students. He has been publicly recognized for such efforts. In 2018 he was voted Faculty All-Star (together with nine other colleagues) for mentoring student athletes. He was named Charles Elliott Scholar of Latin and Greek for 2018-21, for dedicated teaching, scholarship, and service, including program-building in Classics at Lafayette. He was also awarded the Delta Upsilon Distinguished Mentoring and Teaching Award in 2013.

If you would like to learn more about developing an interim study away program, please contact the Director of Study Abroad, Rochelle Keesler keeslerr@lafayette.edu .