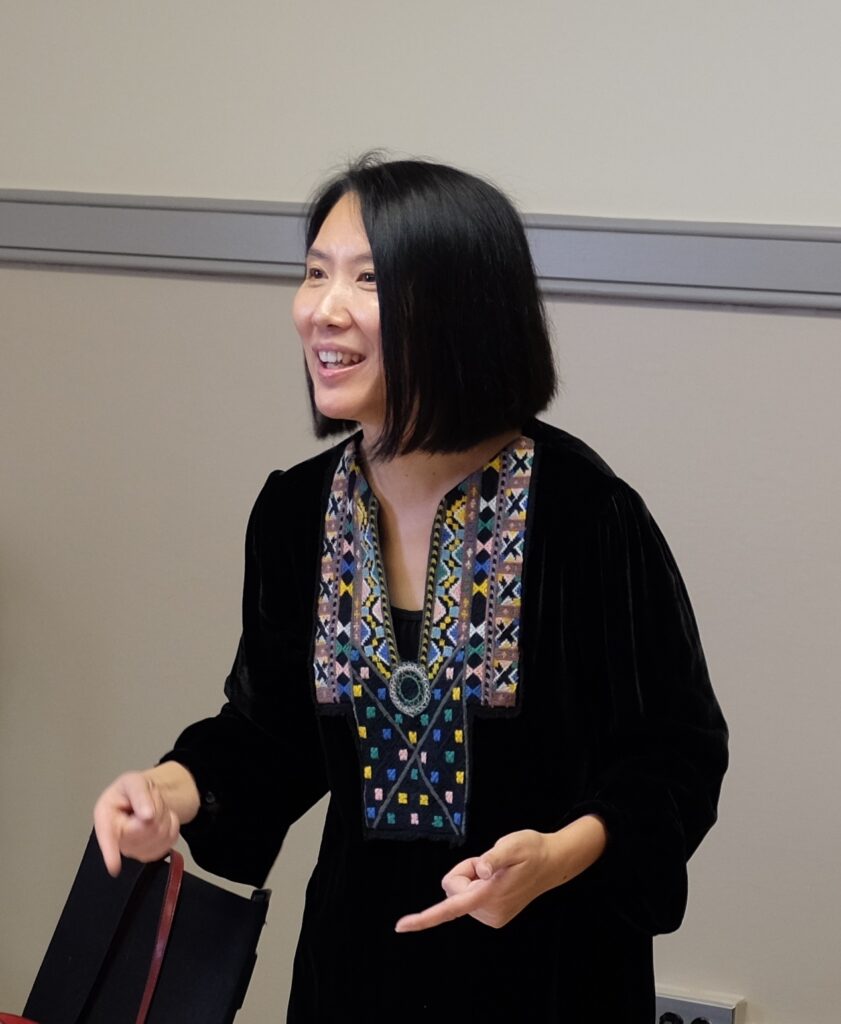 “I want students to talk about stereotypes and grow through misunderstandings and conflicts. However, students want to maintain this nice relationship with their language partners and so they choose to be polite to each other. Students actually confess that they do not want to offend people. However, in order to learn, you need to talk about sensitive stuff. You need to be willing to offend and be offended and then solve the conflict. If there is no conflict then how can you learn? So I thought, since everyone is being so polite and friendly, let’s only focus on sensitive and offensive topics.”

Today we feature Professor Han Luo from the Chinese language program, Department of Foreign Languages and Literatures. She has taught at different institutions but at each place she has remained consistent in her philosophy regarding students. She explains:

You have to focus on the students. I devote a lot of time to learning about my students individually and I put their needs in focus rather than acting as an authoritative figure. I learn what they need, what motivates them. Some students are anxious and they might hide it. In order to speak Chinese or to speak in a different language you need to create an atmosphere for them to talk and feel comfortable. At the same time, in the classroom I try to light a fire and encourage them to be responsible for their own learning and self-autonomy outside of the class.

Professor Luo works to create this atmosphere by promoting learning inside and outside of the classroom through a high-powered social media app called WeChat. Her students often joke that she is “turning the class into a 24-hour Chinese learning experience for us!”. WeChat, as it connects Chinese students with students at Lafayette, serves as a base to promote the learning of Chinese culture and the learning of the language itself. Professor Luo details that,

WeChat is a powerful app and the #1 social platform in China. It integrates everything – Facebook, Instagram, Skype – you can share moments, video chat, leave voice messages. WeChat is a part of Chinese life. So, we make a class group and then students at Lafayette interface with students in China. Every time we learn new vocabulary, they use that to ask questions to the group and sometimes they even try to be funny. You have to answer according to your own situation so they get to know each other more and more. 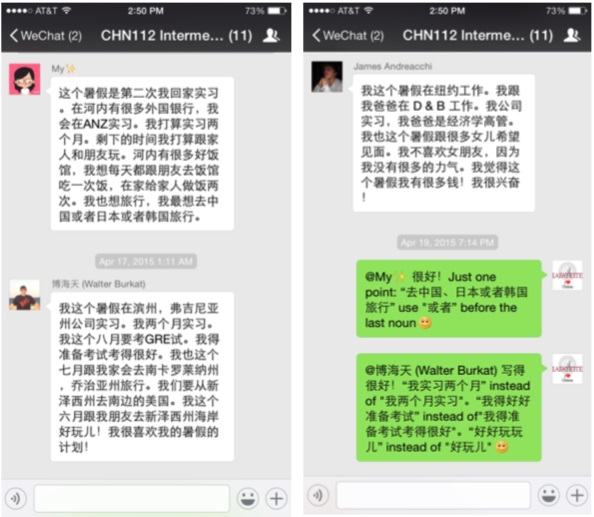 While WeChat can be a great way for students to test out vocabulary, Professor Luo also uses it to build bridges between life at Lafayette and life in China. She encourages her students to ask tough questions and confront things like stereotypes through their conversations.

Sometimes I will throw a word out to the group and then different pairs will do a word association. And when they do a word association, they stimulate different neural and cultural networks. So, for example, for the word “gift,” American students might say “Christmas” and the Chinese students might say “elders” and then we talk about that. Several keywords can stimulate an entire cultural background and networks. The ultimate goal of learning a foreign language is to help students develop intercultural communicative competence and become a competent global citizen. It is important for students to be able to reflect on the differences and similarities and gain insights into the target culture through the lens of their own. It is also important for the students to question the ordinary, the known and the accepted when exploring something new or different. That is why I created the Chinese-American Online Intercultural Exchange Program at Lafayette. I want students to talk about stereotypes and grow through misunderstandings and conflicts. However, students want to maintain this nice relationship with their language partners and so they choose to be polite to each other. Students actually confess that they do not want to offend people. However, in order to learn, you need to talk about sensitive stuff. You need to be willing to offend and be offended and then solve the conflict. If there is no conflict how can you learn? So I thought, since everyone is being so polite and friendly, let’s only focus on sensitive and offensive topics. So we actually did that. I told them to pick one or two topics that they think will actually offend others. And then, that semester, we only focused on those. For example, the Chinese students might say, “I feel bad to say this, but based on my interactions with Americans, they tend to be very fake. They always say good things. Why is this the case? I really want to know.” And then we talk about it. 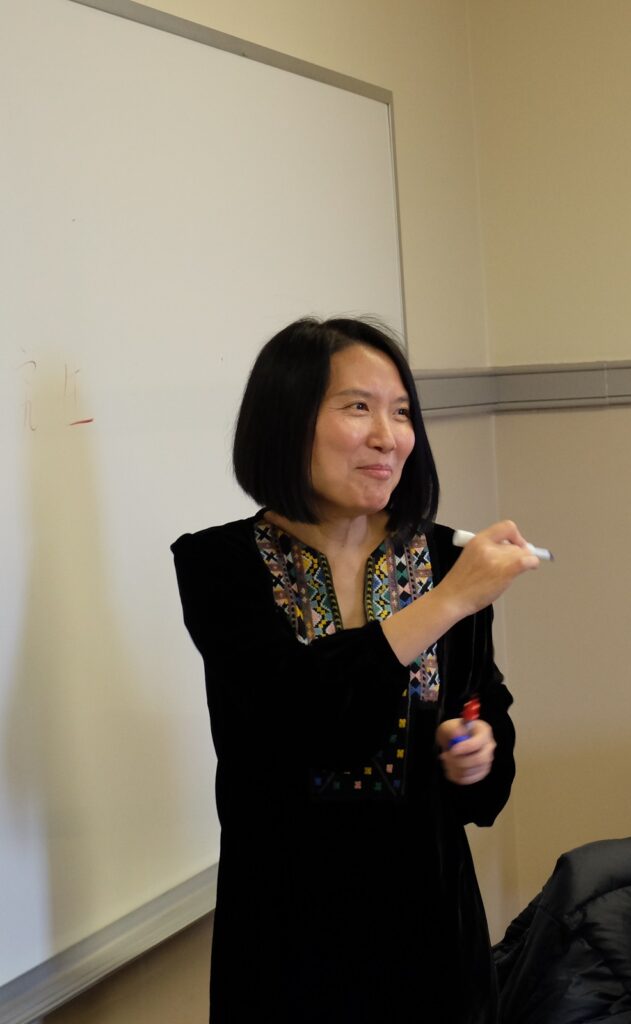 In discussing these issues, students often come away with a richer understanding of the political and economic implications of cultural norms. For example, Professor Luo relayed that,

One day, the question to the group was ‘what do you do after college?’ And the Lafayette students said ‘Maybe live with my parents and pay a little rent.’ And the Chinese students said, ‘Oh my god, you need to pay rent to your parents?’ But in China there was a one child policy and so many parents feel like what is theirs is their child’s. So these things that are connected to politics come up in discussion. When they do these discussions, I try to let them discuss so they do not feel like there is an authoritative figure. But, when I see that there is a theme buried in the discussions that deserves more attention then I will bring it up in the classroom and discuss it. Then, I may give them my own insight or suggest that students do a presentation on a topic or some research on this so we can go into it deeper and find out why these are cultural norms.

On top of WeChat, Professor Luo also gathers students reflections and finds that,

Students go into conversations with the goal of finding differences but will then remark that they find that they are actually very similar. The conclusion is often there are more similarities than differences. For example, the struggle between social life and academics or feeling at a loss for what will happen in the future. These are commonalities. 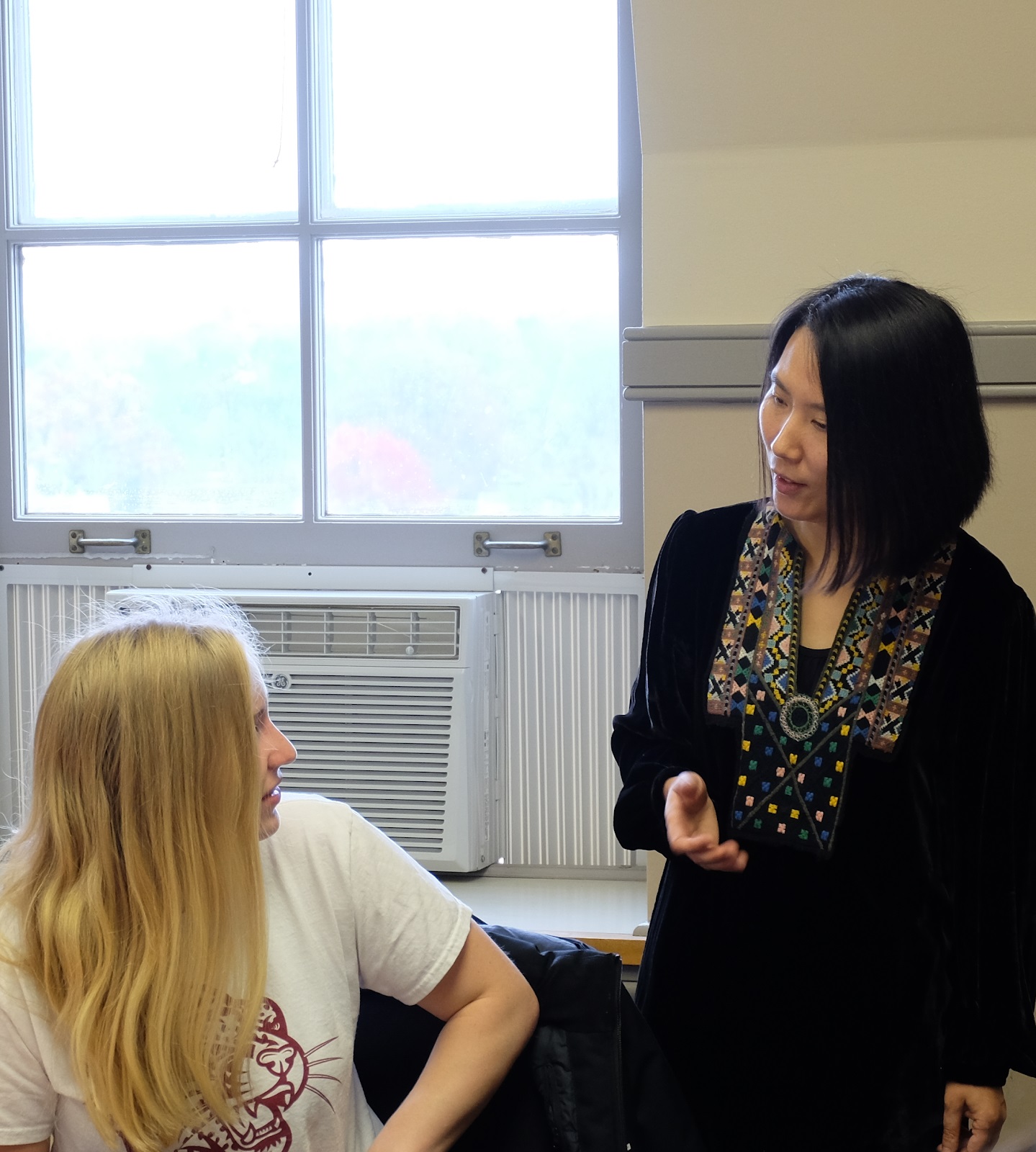 Professor Luo’s work with her students and WeChat has been featured in Computer Assisted Language Learning and she continues to do conference presentations on this topic throughout the Lehigh Valley and at national and international platforms such as The American Council on the Teaching of Foreign Languages. You can also find Professor Luo on our Lafayette Teaching Connections platform under WeChat.