Engineering design starts with empathy for the people you want to help, and that empathy includes having an understanding of the social, economic, and political systems those people exist within: all the secondary and tertiary stakeholders in the potential success of a designed sociotechnical intervention. Teaching and learning in an interdisciplinary liberal arts environment helps develop the ability to imagine both the technical wizardry and all this systemic complexity, and to collaborate when you can appreciate both the value of other kinds of expertise and the limits of your own.

Pretending that STEM can be somehow “neutral” or “objective” denies the humanity of the people who do STEM — our flaws and biases, as well as our capacity for empathy and collaboration. For me, telling the histories and critiquing the ways that humans have developed science and engineering knowledge is about showing students they too will have this power to re-mold the culture they’re part of and to be makers of new knowledge.

We have to put the humans back in STEM.

In the midst of a global pandemic that has brought to the surface once again the deep inequalities faced by the minoritized and marginalized, Professor Jenn Rossmann reminds us that it is even more crucial to work toward the creation and maintenance of inclusive STEM spaces and practices. In the classroom, as well as in her role as the co-director of the Hanson Center for Inclusive STEM Education with Professor Chawne Kimber, Professor Rossmann works to “put the humans back in STEM.”

When asked to describe what a typical day in her class looks like, Professor Rossmann’s enthusiasm and excitement shone through. “I am very enthusiastic in my classes; the days I teach are my favorite days,” she related, adding that “I love sharing my subjects; there are goofy faces, and I definitely have a set of ‘refrains’ that my students hear me say in every class.” These refrains, which are part of her teaching methodology, are ways to make her students engage with the challenging content of her courses in approachable, everyday ways.

As we cover material, I ask my students to explain it to “a person on the bus.” This person on the bus is your average everyday person, someone who could understand what we are doing here if we explained it to them in simple, relevant terms.

In recasting complex concepts and ideas in layperson’s terms, students not only better grasp the significance of physical processes in daily experiences but also practice taking down barriers that keep knowledge circulating in the closed confines of the classroom experience: “It’s a way of making learning more accessible and inclusive,” she explains.

To recast and be able to tell stories involves active listening, a technique usually associated with a student’s responsibility to pay attention and participate in a discussion. But in Professor Rossmann’s classes, active listening also involves her own practice of listening to her students’ interests, their thoughts, and their experiences.

Listening is a key component in her First-Year-Seminar “Technological Citizenship,” where students delve into the social impact of new technologies without losing sight of the historical and ethical implications of the production of that scientific knowledge. Her students research technologies and places that are interesting to them, which boosts participation and engagement. Furthermore, students in this course engage in thought experiments where they work through a new concept and practice predicting what happens next, who benefits, and, who it could harm: “Remember that bridge that fell down? Okay, let’s think it through. What happened and why,” as an example she shares that:

In “Technological Citizenship,” we consider the ethical implications of engineering and technology, that is, the human values that inform and shape the products that we use as users and as creators of these products. As technological citizens, we have rights and we also have responsibilities.

An avid reader, Professor Rossmann wants her students to think about how to avoid becoming characters in Black Mirror, a reference to the popular dystopian Netflix show that portrays the complicated and unequal relationships between humans, society, and technology. She argues that the time is now to engage in powerful conversations that predate the present moment:

It is perhaps more necessary now than ever to remind ourselves, and our students, that disciplines, and STEM in particular, aren’t neutral, that our fields are historically situated, made by and for humans, and that our students have the power to shape the future. When we think of so-called neutrality in STEM, we are thinking of white cis-gender heteronormative able men. And we’re erasing human choices and values. In 1963, James Baldwin delivered “A Talk to Teachers,” where he clarified: “the paradox of education is […] that as one begins to become conscious one begins to examine the society in which he is being educated,” which means that we should help our students to understand that the world was molded by people in the past, and they have the power to remold it into something new.

For me, telling the histories and critiquing the ways that humans have developed science and engineering knowledge is about showing students they too will have this power to re-mold the culture they’re part of and to be makers of new knowledge. Pretending that STEM can be somehow “neutral” or “objective” denies the humanity of the people who do STEM — our flaws and biases, as well as our capacity for empathy and collaboration.

Justice is a common thread that links her role in the classroom and as co-director of the Hanson Center for Inclusive STEM Education. The Center, whose charge is, as its title makes explicit, to foster and encourage inclusion, is a physical space on campus from where STEM education can be reworked to be healthy, inclusive, and accessible: “we want to ‘remold’ the culture of STEM,” Professor Rossmann explains, adding that:

An ecosystem thrives on diversity; therefore, diversity is key. For us at Lafayette and in STEM fields, this means that students should be supported and faculty should be trained so that the whole ecosystem can thrive.

The Hanson Center is strategically positioned to promote and foster inclusion and accessibility in STEM education at Lafayette. Professor Rossmann dubs it a “distribution center,” working with partners such as CITLS, which offers faculty opportunities to develop and assess inclusive teaching strategies, and through programs such as SPAL, the Summer Program to Advance Leadership in STEM, a six-week launchpad to life at Lafayette for selected incoming first-year students which Teaching Excellence featured last October, as well as through the integration of STEM Studies (STS) perspectives. 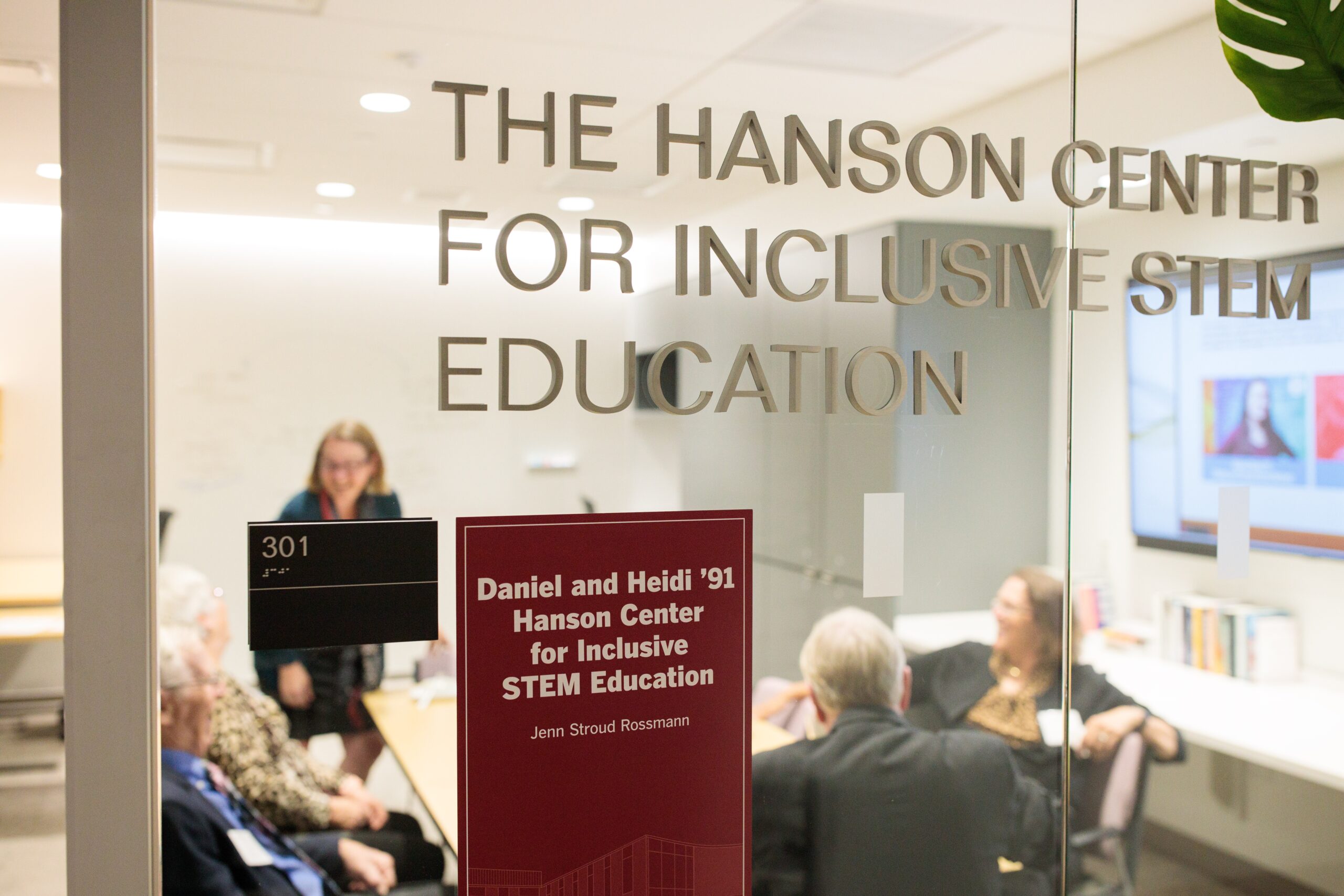 The Center also participates in wider initiatives such as the #ScholarStrike, which took place over 48 hours on September 8-9. Inspired by the NBA, the WNBA, and athletes such as Colin Kaepernick and others, the strike was an opportunity to focus on disrupting academic business-as-usual. The Hanson Center hosted two events for faculty and staff, offering resources and support to colleagues wishing to integrate conversations about racial inequality and anti-black police violence into their teaching. Among the suggested readings and resources shared on the Center’s website, pieces that draw attention to the longstanding challenge of inclusion in STEM take center stage. Professor Rossmann reflects on the reception of the #ScholarStrike events at Lafayette in the following way:

The #ScholarStrike events demonstrated that these conversations did fit into our classes. Just as our classrooms aren’t neutral, neither is STEM: it’s value-laden. We need to reckon with STEM’s socio-cultural context too. Moving forward, we need to protect physical spaces that nourish, value, and support our students of color, such as the Portlock Black Cultural Center.

What lies ahead for the Hanson Center and Professor Rossmann? The Hanson Center will host professor Ruha Benjamin, founder of the Ida B. Wells Just Data Lab at Princeton. Dr. Benjamin will speak on “Race to the Future? Reimagining the Default Settings of Technology & Society,” on Wednesday, October 7. The talk is part of the Resnik and Landis Lecture Series, and hosted in collaboration with the Forum on Technology and the Liberal Arts, as well as co-sponsored by a number of academic departments and programs. The Center is facilitating book discussions of Benjamin’s book Race After Technology. Among the plans for spring are workshops addressing equity in remote and hybrid teaching, and efforts to sustain the momentum of the #ScholarStrike and Benjamin events.