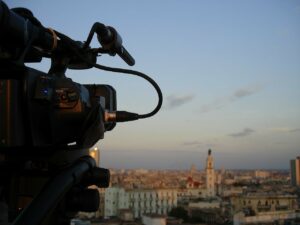 To describe how instructors can use film as a pedagogical tool in the classroom to generate discussions around bias and inequities.

Film, especially documentary cinema, is often misunderstood to be transparent and objective, and common sense notions such as “the camera doesn’t lie” can be a misleading assumption for students and educators. In this regard, film can be used as a tool in classrooms to reveal biases and foster discussion around issues of equity and inclusion. This resource helps instructors generate discussions around:

When viewing images, invite students to consider both the content, what is in the frame, and the context, what is outside of the frame. Specifically, when students watch the film, ask them to analyze the aspects noted below and to share their observations.

Born Into Brothels is a documentary film about the children of sex workers in a red light district in Kolkata, India. I used this film in a course and students analyzed it using the questions above. The content and context questions were relatively easy to implement and worked well to signal to students my commitment to their success in analyzing the documentary.

In the piece referenced below I make comparisons between Born into Brothels and a film I produced, Soma Girls, which paints a different story of the families of the children living in brothels. By answering the questions above, students can generate similar observations of the film.