This resource on Creative Dramatics was created by Professor Mary Jo Lodge, CITLS Distinguished Teaching Fellow in the 2021-22 academic year, who explored how Creative Dramatics and Arts-Based Pedagogy can be used across the curriculum in the College classroom. 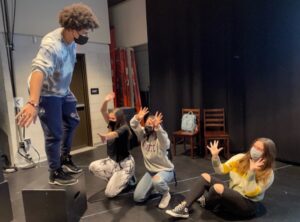 Theatre Game as Metaphor: Students engaging in a theatre-based game

Creative dramatics is the term used in the United States for when theater techniques are engaged in the classroom (typically for K-12 students) to teach students not about acting or performance, but instead for lessons about other subject areas including math, literature, history, and science. Ruth Beall Heinig, one of the major figures in the field, reports in her book Creative Drama for the Classroom Teacher that The American Alliance for Theatre and Education (AATE) defines creative drama as “an improvisational, process-centered form of drama in which participants are guided by a leader to imagine, enact and reflect upon human experience.” (5) Heinig goes on to add that many activities fall under the rubric of creative drama, including “movement exercises and explorations, pantomime, theatre games, improvised story dramatization, discussions and debates in role, and group improvisations” though most creative dramatics activities revolve either around image exploration or role playing. (5)

Creative dramatics, as a practice, has been in use in American Classrooms since at least the 1970s, and teachers and students typically agree that utilizing theater techniques in the classroom as an active learning technique for children is highly effective. In fact, children often become extraordinarily engaged in lesson plans in almost any subject area when the experiential learning that theater techniques can provide are engaged. Arts-Based Pedagogy, a more recent approach, expands the techniques utilized in creative dramatics teaching to also include ones drawn from disciplines beyond drama, including visual art, dance and music, but to the same ends.

While little has been written about applying creative dramatics techniques in the college and/or university classroom, it certainly stands to reason that students do not “age out” of the effectiveness of creative dramatics lessons, and in fact, when applied in ways that are appropriate to the material and maturity of the students, creative dramatics has the  potential to be a powerful learning tool for college students and indeed, all adult learners.  At a time when many students and faculty are suffering from exhaustion and Zoom fatigue after enduring the prolonged challenges of the pandemic, finding ways to make the return to the in-person classroom especially engaging and participatory, indeed, truly active, seems like the perfect way to create learning experiences that are invigorating enough to combat the collective weariness on college campuses.

For example, creative dramatics pioneer Cecily O’Neill has long advocated for role-playing as a classroom learning technique. She says (qtd. in Nellie McCaslin’s seminal text Creative Drama in the Classroom and Beyond):

A central concept in my work is role-play. …By exploring the different perspectives offered by fictional roles, students may come to recognize, and, if necessary, modify their habitual orientation to the world. . . . In drama we are not seeking solutions or finding answers, as is often the case when role-playing is used as an instrument in the curriculum. We are trying to release students into finding their own questions.

The goal of all of our courses, especially in a liberal arts setting, should be helping students to find their own questions, and incorporating creative dramatics techniques into all of our courses can help students to achieve that worthy goal. The imaginative planning and active engagement with students required for this teaching technique on the part of the faculty member demonstrates that such work is a marker of teaching excellence. Of note, there are a number of different ways to approach creative dramatics in the classroom. While O’Neill supports role playing almost exclusively there are other techniques, some based in play and games, which are equally effective at engaging students in areas beyond theater.

Resources and Reflections on Using Creative Dramatics in College Classes

The book Drama-Based Pedagogy, by Kathryn Dawson and Bridget Kiger Lee, which grew out of the excellent Integrated Arts Program at University of Texas at Austin, is an excellent place to begin an exploration of creative dramatics. While not specifically targeted for use with College students, the pedagogical principles it introduces are easily applicable for any age group. It is especially helpful because it compiles resources from several other texts, including those by leaders in the field like Viola Spolin and Augusto Boal, together into a useful, hands-on guide. It also recommends a particular structure for an individual course session which utilizes creative dramatics, which I found useful in my classes. The lesson is modeled according to a plan that will Engage, Explore and Reflect (Dawson, 41). Dawson and Lee break down this Engagement Phase into Activating Dialogue, while they break down the Exploration phase, where the bulk of the creative drama work resides, more specifically into Theater Game as Metaphor, followed by Image Work, followed by Role-Work.

Dawson and Lee recommend using a range of activities in the step, typically at the start of class, to get students thinking and talking, and by extension more prepared for the active learning that will take place. One exercise from their text that I tried in my Fall 2021 courses for Activating Dialogue was the check-in  wherein the leader gives the students an open-ended prompt to begin a brief activity (p. 62). I tried asking students for anything  good that happened since the last class, since we were still squarely in pandemic time, and we needed to celebrate every win. Students began to applaud each other’s accomplishments and good fortune, and this moment of celebration frequently transformed the students, who were often experiencing a great deal of stress, into more present and engaged participants.

Dawson and Lee again recommend a range of activities for this, but I found physically active techniques, even if they were brief, or silly, served the purpose of getting students engaged and ready to participate enthusiastically. I experimented with several exercises, and generally all had the same result, which was engaged students who more readily participated. One fun activity I used, a technique I had learned as part of a previous theater production, was having everyone stand and sing the song, “My Bonnie Lies Over the Ocean” while bending or straightening their knees each time they made a “B” sound. The game is more challenging than it sounds, and the fast-paced activity, which requires quick thinking translated to physical action, was as engaging for College student and adult classes as it was for the groups of children I had used it with previously.

Dawson and Lee recommend working with images to help center the work on the topic at hand. There are many ways to engage with image work, from using Integrated Arts techniques like drawing or painting and even dancing, but I found working with Jamboards (a sort of shared Powerpoint-style slide which all students can contribute to at once in real time) to create a visual collage to be very effective. Dawson and Lee recommend image collages; I opted to use Jamboard because it worked for both virtual and in-person learning, as I tried it in both delivery formats. In this case, I asked students to find images that were evocative of a play we were reading in class, and they posted those and they became the basis for a class discussion of the play. I left the visual collage that they created on the Jamboard  visible throughout our discussion, as we could keep returning to compelling images and I could redirect the conversation about the play by selecting different images on which to focus. 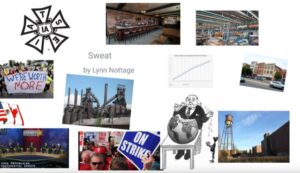 Example of a Jamboard

Role work is at the heart of creative dramatics and stepping into a role in an exercise can be a transformative experience for students as they explore the material in question. I tried several role-playing exercises during the 2021 Fall semester and found each worked very well and encouraged the students to make connections with the material, or in our case, with the characters in the plays we were reading, in ways that discussion-based pedagogy alone would not have achieved. For example, in one exercise, I placed the students in small groups and asked them to collaboratively write a ten-minute play following up with the characters from the play we had read (which was set in the last five years) after the 2020 Presidential Election had been decided. The students had found the characters in the play unlikeable and hard to connect with, typically because nearly all the characters’ viewpoints, which revolved around religion and politics, were opposed to the prevailing views of the students in the class. This exercise, in which they had to create words and circumstances for these characters allowed them to connect with them as people and to find the humanity in characters they initially viewed as negative caricatures. Perhaps more than any other exercise I did this term, this one, in a fairly brief period of time, allowed the students to develop empathy for characters that, had we simply only discussed them, might not have resonated in the same way for the class members.

Bolton, Gavin M. & Dorothy Heathcote. So You Want to Use Role Play?: A New Approach in How to Plan, London: UCL IOE Press (Trentham Books), 1999.

Website offered in conjunction with the Drama Based Pedagogy text by Dawson & Lee and has searchable resources for exercises, etc.  This covers all four of the categories addressed above.

Website out of Barnard College for Role Playing Games, originally in history, but now covering some other disciplines