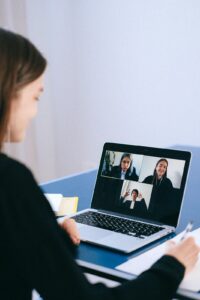 The purpose of this resource is to share student perspectives on the effective usage of online breakout rooms. These recommendations were developed in partnership with CITLS Student Fellows, who drew from their classroom observations during the Fall 2020 Inclusive Instructors Academy as well as their own experiences as students in courses taught online.

Overview of Community of Inquiry Model

One model that can apply to the usage of breakout rooms is the Community of Inquiry (CoI) framework (Fiock, 2020). This framework includes three elements known as presences: cognitive presence, or the extent to which learners can construct knowledge and develop new understandings (Swan and Ice, 2010); social presence, or learners’ affect, which encompasses the ability of students to feel connected with peers; and teaching presence, which includes the “design, facilitation, and direction” (Anderson et al., 2001) of the other two presences (Castellano-Reyes, 2020), and entails the role of the instructor on tasks associated with managing and leading a course, such as designing materials and activities, conducting and leading discussions, summarizing key points, and handling the direction of the course and its participants. Each of these presences works interconnectedly and can contribute to student success in an online learning environment. In courses that meet over video conferencing, instructors can use breakout room spaces to promote cognitive and social presence by building students’ knowledge of the subject matter and connections with  each other in smaller groups.

Zoom and the Breakout Room Function

The breakout room is a function in Zoom that allows the host to group participants into smaller rooms during the same call or session. The feature is usually used to recreate small group work during a class session. Students in breakout rooms can work with their peers in small groups, talk to each other, share their screen, and “connect” with fewer classmates. Additionally, similar to the ways in which a professor might circulate around groups in a physical classroom, the host can visit breakout rooms to check in on students, answer questions, and make sure that everyone is engaged.

While breakout rooms provide a chance to emulate the kind of group work that fosters social and cognitive presence, sometimes they can produce the opposite effect: muted faces on the screen doing work individually and not really “connecting” with each other.

When determining how to assign students to breakout rooms, consider the following:

In general, giving students direction during breakout room sessions is important for them to be able to meet the goals of the activity.

Consider whether and how to interact with students during the breakout sessions.

Closing the breakout session without a warning can feel abrupt and interrupt students mid-work, even mid-sentence.